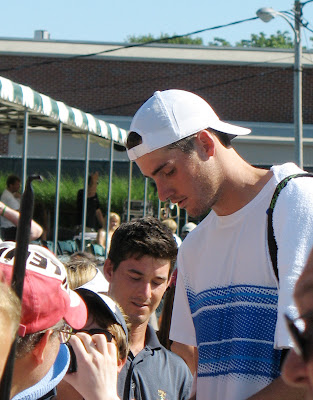 Despite appearances, tennis players lead very hard lives. When you combine a grueling schedule and non-stop travel with media and sponsorship obligations, there isn't much time for anything but eating and sleeping, nevermind attending a family wedding.

You don't hear much from tennis players about those family gatherings that pop up from time to time, or the tough choices they have to make in order to strike a balance between court-time, and making time for family.

Being a tennis player is not like having a regular job where you can either call in sick, or find someone to fill in for you for one day. And if a player does get sick (or injured) and can't play, they don't get paid, and risk falling back in the rankings. And taking time off in the summer? Not so easy. What is typically prime time for weddings, graduations, and family vacations, is also prime time for the tennis season.

It's not so difficult to envision a tennis player standing on a practice court, "Skyping" on their iPhone to make a "virtual" appearance at a family vacation. Or even a brother holding up a cell phone at a family wedding so that their globe-trotting tennis player sibling can watch the ceremony before working on their forehand.

Holidays are easy (or easier) to manage for players, since they are already scheduled years in advance. But then again, how many American players would choose to attend a Fourth of July family cookout over Wimbledon? Not many.

John Isner, who won the Campbell's Hall of Fame Championships in Newport, RI this past weekend (his second career title), was faced with a tough decision heading into the tournament. Family or tennis? Isner wasn't planning on coming to Newport at all, but entered the tournament at the last minute as a wildcard. By choosing to play, he knew there was a chance he'd have to miss his brother Nathan's wedding on Saturday, but had hoped that this tournament would give him a shot at a title.

"The only way that I was going to miss the wedding is if I got to the semifinals," said Isner, who was the No. 1 seed in Newport. "It definitely turned out to be a great decision, and I owe a huge thanks to Mark Stenning for the wildcard. This is a perfect start to the summer. I feel like my best surface is hardcourt in the US, so I should get a lot of confidence from this."

Isner was on top of his game in Newport, defeating Olivier Rochus in the final in straight sets, and scored 22 aces (76 in all for the tournament). He was serving at his best, and didn't drop a set during the entire week. As a bonus, Isner broke the "Curse of the Casino", becoming the first ever No. 1 seed in Newport to win the title. As a result of his win, Isner has jumped 10 spots in the rankings to No. 36.

So what did Nathan have to say about his brother's excuse for not being there on his big day? "He understood," said Isner. His new sister-in-law? Not so much. Isner will be paying for their honeymoon, which will likely keep the family peace. Good thing he won.
Posted by Paula Vergara at 11:05 AM

Thanks, Aaress. I couldn't believe John missed the wedding, but I have a feeling that this type of situation isn't all that uncommon, unfortunately. Another type of family gathering -- funerals. That must throw a HUGE monkey wrench into a player's schedule.

Anytime a career requires travel such as tennis, life with family must be tough, unfortunately many times you see the individuals that chose the career over family and it shows in their life. Great article.