Kelly never too busy to help lead the Connecticut Hornets 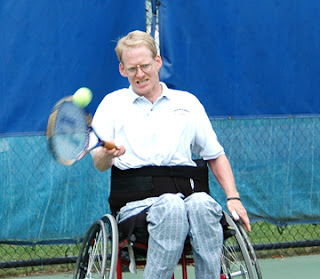 BRISTOL, CONN. - Dave Kelly—he’s an athlete, alright.
His sport? Wheelchair tennis.
His passion for sports began as a kid, playing tennis and basketball. Despite being injured in a car accident in 1987, which left him paralyzed from the waist down, he knew that somehow, he could handle the enormous challenges ahead. He’s also not the type to let his disability define him. Following his accident, he spent two months at the Gaylord Rehabilitation Hospital in Wallingford, Connecticut, which would later prove to be the key to bringing him back to tennis. Unlike other rehab centers, Gaylord takes an innovative approach to treatment, providing patients with the opportunity to try out various wheelchair sports through its Sports Association clinics.

After Kelly completed his rehab at Gaylord, he always remembered the two tennis courts at the hospital, and dreamed that someday he could play. Despite some recurring health problems following his injury, Kelly's dream to regain his competitive spirit and active lifestyle came to fruition in 2005. While attending a wheelchair tennis clinic at Gaylord, the head coach of the Connecticut Hornets team, Paul Brower, saw Kelly's athletic talent and encouraged him to get back onto the court. He accepted the challenge to join the team, and hasn’t looked back since.

While competition and the thrill of winning are great motivators for both wheelchair and able-bodied players, Kelly says that what motivates him on the tennis court is “having physical well being and the opportunity to participate in the sport with my peers and family.” He particularly enjoys getting out on the court with his nephews: Taylor age 14, Joshua age 12, and Trevor age 10. Kelly admits that it took him some time to get used to the racquet, since most wheelchair players use a smaller grip to be able to hold both the racquet and the chair at the same time while moving. Kelly points out that “since wheelchair tennis is probably the least modified of all the wheelchair sports (playing the ball on two bounces being the only difference) it makes it easy to enjoy playing the sport with others.” This match up helps to break down some of the barriers that often limit interaction between the wheelchair bound and the able-bodied world. Wheelchair tennis also provides Dave with a great release after working long hours as a Finance Manager at ESPN in Bristol, CT, a job that that he has held for the past 8 years.

Kelly also finds time to give back. He volunteers with ESPN’s philanthropic branch, TEAM-ESPN, helping the Special Olympics by organizing events for regional competitions, and is also on the board of The Hospital for Special Care in New Britain, CT. As a member of ESPN’s diversity committee, Kelly says “it’s one of my goals to get wheelchair tennis coverage on air at ESPN. Now that wheelchair tennis is part of all four grand slam tournaments, I'm optimistic this will happen because ESPN carries broadcast rights to three out of the four tournaments.”

In 2006, Kelly led the effort to bring a wheelchair tennis exhibition to ESPN's campus, as a way to gain greater exposure for the sport. Heavy hitters such as Jon Rydberg (#1 ranked USA male player), Karin Korb (#2 ranked USA female player) and Dan James (USTA National Manager of Wheelchair Tennis), all participated in the ESPN exhibition. If that isn’t enough, Dave is a mentor for a local 1st grader, serving as a positive role model for a child who might not otherwise have that support.

Kelly's teammate, and CT Hornets Captain, Karen Smith, has been playing with the Hornets for more than 8 years. She’s passionate about wheelchair tennis, as well as other adaptive sports such as sledge hockey, skiing, waterskiing and hand cycling. Smith says that Kelly's athletic ability and tennis skills have improved tremendously since he joined the team a few years ago. “When he was setup with the right kind of chair and racquet, he excelled immediately and is just hooked on tennis now,” the captain said.

Kelly uses a custom-made wheelchair, built to his specifications. He needs to have some bracing around his mid-section when playing, but doesn’t have any other hindrances in his upper body. Smith says that most players start out with a tester chair, but if they stick with the sport, players often opt for a custom-made chair.

Like Kelly, Smith enjoys competitive play with able-bodied tennis partners, especially the “One-Up-One Down” style of play, a doubles match where one wheelchair player teams up with an able-bodied player. She describes the experience of playing wheelchair tennis as “like being a shark in water—if you stop, you’re dead in the water.” It’s all about constant motion. Most wheelchair tennis athletes play at the baseline, or what players call “The Hub”. The game is played on hard courts, or well-packed clay, although recently, wheelchair tennis has been played on grass at Wimbledon. Tennis wheelchairs have 3 or 4 wheels, angled at 20 degrees (maximum), to be able to spin on a dime. The most popular tennis chair is the “Quickie Match Point”, designed by Randy Snow, an Olympian and top U.S. wheelchair player. One of the biggest challenges in wheelchair tennis is the inability to use sideways movements. Wheelchair tennis athletes rely on quick spins and straight, forward wheeling to get to a ball.

Kelly has had a chance to showcase his tennis talent in singles, doubles and seniors matches on a national stage. He has played in several major tournaments such as The U.S. Open in San Diego, The Cajun Classic in Baton Rouge, The Gateway Classic in Belleville, IL and the Jana Hunsaker Tournament at the USTA Billie Jean King National Tennis Center in New York City. When asked who is his most memorable opponent to date, he says “Without question, Gunther Lector. He’s the first person I played as a wheelchair tennis player at the Gateway Classic in 2005. Our skill level is just about even and we’ve built up a good rivalry.”

When Kelly began entering wheelchair tournaments, he noticed that not every player has the same type of disability, with some being more restrictive than others. Some players are quadriplegic—also known as “incomplete quads” (having arms that are semi-mobile), or paraplegic, while others are amputees. Most quad players don’t have grip strength, so regulations allow those players to tape the racquet to their hands for more stability.

At 45, Kelly is now in his 3rd year as a wheelchair tennis athlete, and has quickly become a force to be reckoned with as a member of the Connecticut Hornets. His demonstration of athleticism, inner-strength and fortitude will help pave the way for other disabled men and women to get involved in wheelchair tennis, and help them return to an active lifestyle.

The Hornets, sponsored by The Gaylord Sports Association, have a core group of 6 members, and are always looking to add to their team. Current team members include Kelly Loth, David Kelly, Jeff Lavoie, Francois Trawalter, Colleen Rock and Karen Smith. In addition to the Hornets, wheelchair tennis teams can be found in every state in New England, except Vermont. There is no denying that The Hornets wouldn’t be who they are without the support of Gaylord Hospital’s Sports Association, providing on-site tennis courts, equipment, uniforms, and covering all travel expenses and transportation to tournaments.

For more information about the Gaylord Sports Association, visit
www.gaylord.org/pages/sports.html or call (203) 284-2772.
Posted by Paula Vergara at 10:18 AM 2 comments: