Fire It Up One Time…BAM! 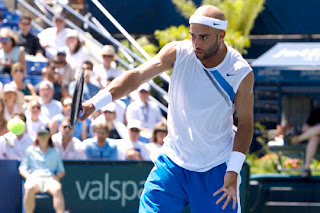 The J-Block isn’t your ordinary group of tennis fans. Since 2005, they’ve been a permanent fixture up in the stands with their signature blue shirts, showing support for longtime friend, James Blake. The “unofficial” captain of the J-Block, BobbyD, took some time recently to give us the lowdown on what makes the J-Block so special.

Who came up with the name J-Block?

BobbyD: The name J-Block was created by Ann Worcester, Tournament Director for the Pilot Pen. The original group of J-Blocker's consisted of friends of James and Brian Barker (his coach) - all from Connecticut. James' friends and Brian's friends all know each other and actually have competitions, like bowling, golf, darts, etc against each other - the young guns against the old guys. Brian was coaching James before he was a teenager, and most of the other young guns in the group were coached by Brian also.

Your shirts say: Fire it up one time…BAM! Who came up with this slogan and what does it mean?

BobbyD: Fire it up one time...BAM is a saying that our group uses. It was started by Andy Jorgensen while at a boring party—he was trying to get it going and yelled that out loud. We started using it with James when our group went to Indian Wells for a tournament. We all went there to surprise Brian for his 40th birthday. Andy yelled “Fire it one time” to James when he had a big break point, and when James nailed a powerful winner, we all yelled out “BAM!” at the same time.

What do you think of James’ new book, Breaking Back?

BobbyD: We all read James' book and thought it should have been number one on the New York Times bestseller list! (Just kidding). However, after living, telling and hearing James' story, reading the book was still emotional. We thought it was great that he mentioned so many of us and the local places we all go to. The book is very accurate in the way James thinks and acts.

James recently partnered with Nike to sell the J-Block t-shirts. What color would you call these shirts anyway?

BobbyD: When James returned from his illness, 25 of us had shirts made up in James' favorite color...Carolina Blue and the slogan on it. We did not have anything to do with the naming of the J-Block, but we fit in perfectly when we got to the Pilot Pen. We just wanted to be there to cheer him on. Since then, the J-Block has grown to just about every tennis fan out there. Nike ended up making shirts that sell for one of James' charity of choice [USTA Tennis and Education Foundation] and you will see people all around the world that have his shirt and set up a J-Block at each tournament. Sometimes it is only 2 or 3 people.

How hard is it to take time off from work to travel to tournaments?

BobbyD: We have traveled all around the world to watch James—Australia, Moscow, Bangkok, Europe, Vegas, you name it. I think someone has been to every tournament James has played around the world. It's not hard to take off work, because James is always so excited when someone says, "I think I might go to this or that tournament." So, no one minds taking time off work.

What do you admire most about James?

BobbyD: I can't speak for anyone else, but what I admire about James is that even with his fame and fortune, he always wants to get together with all the guys from back home whenever he has a chance. And, he acts like the same fun seeking kid he was as a teenager. Sometimes James only has a weekend home and he still wants to get together and do something with his friends.

Has the J-Block ever become so rowdy that you’ve been escorted out of a tournament?

BobbyD: As far as I know, the original J-Blockers have never been escorted out of a tournament. We feel that even though we are out there having fun, we have to remember that we are there because of James and we would never do anything to harm his reputation.

In your experience, how have other tennis fans reacted to you at tournaments?

BobbyD: The reaction from other fans has been mixed. It is funny, the crowds are so much more rowdy around the world and we would not be considered too loud anywhere, but here. So we try to keep in mind the people who want to go to a tennis match and clap quietly at the end of the match.

Do you think that your group has brought more attention to the game?

BobbyD: I think the J-Block has been good for tennis. Most sports viewers and athletes get excited when the crowd gets going.
Posted by Paula Vergara at 2:34 PM No comments: