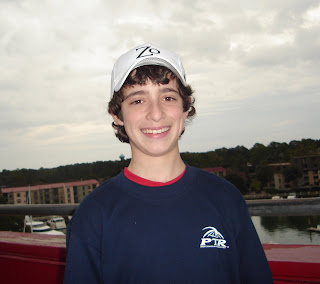 TRUMBULL, Conn. —The phone rang at Angela Buxton’s London home at 11am. It was Josh Rubinstein on the other end, a bleary-eyed, 14-year-old high school freshman from Connecticut who made the overseas phone call at 6am (US time). After being assigned to write a research paper on how anti-Semitism affected the life of a famous Jewish individual, Josh had no way of knowing that the subject of his paper would be a former tennis champion. It all came about as a result of a chance meeting between Josh’s mother, Marcy Rubinstein and Angela Buxton at the 2007 US Open. For Josh, a junior tennis player, it was a rare opportunity to have a candid, live conversation with a tennis champion from a bygone era. For Angela, it was a chance to tell her story, fifty years after making tennis history as the first Jewish doubles champion, winning both Wimbledon and the French Open doubles titles alongside another barrier-breaking champion, Althea Gibson.

In 1934, Angela Buxton was born into a world of prejudice and hatred. She learned early on about the impact of anti-Semitism, both on and off the tennis court. In the 1950’s, she was banned from tennis clubs and denied the opportunity to play with the other top ranked doubles players simply because she was Jewish.

Josh listened with astonishment as the 74-year-old Buxton recounted her struggles against bigotry throughout her amateur and professional tennis career. He learned that Buxton wasn’t the type to wear her pain or loneliness on her sleeve. She tried to fit in, but, with no other Jewish players on tour, she always felt like an outsider. In previous interviews, Buxton has said, “The anti-Semitism made me more isolated, which I shouldn't have been. It made me more determined, more detached. People didn't realize what I was going through, because I didn't bother to spell it out. I just took another route. The result of which was that I was on my own.”

In 1955, her misery took a happy turn when Buxton met Althea Gibson on a tennis tour in India. Although Buxton and Gibson were considered to be the odd balls of tennis, they not only managed to form a winning doubles team, but also became kindred souls. They were able to lean on each other, despite the lack of opportunity and the obstacles they faced…the struggle to be accepted not only as players, but also as people. Together, they battled the odds to reach the apex of acclaim in their sport.

Despite Buxton’s No. 5 ranking in the world and having reached two Wimbledon finals in the same year, Josh was saddened to learn how Buxton was excluded from the benefits that her non-Jewish peers took for granted. Even after representing her home country with such success, she was never invited to become a member of the exclusive All England Lawn Tennis Club.

Buxton had maintained her friendship with Gibson throughout her life (Gibson passed away in 2003) and helped to promote the Althea Gibson Foundation. Buxton is a member of the International Jewish Sports Hall of Fame.

The experience gained from interviewing Angela Buxton made Josh stop and reflect on his own path in tennis. He himself had never even thought of himself as a “Jewish tennis player”, rather simply as someone with dreams to someday be a professional tennis player. He currently competes in the USTA NE juniors tournaments and is ranked No. 40 in the 14 and under in New England. Josh says “My favorite tennis player on tour is James Blake. I like his intensity on court.” Living next to Blake’s hometown of Fairfield, CT provides additional inspiration for Josh.

When asked about Jewish players on the tour, Josh said, “One Jewish doubles team that stands out is the team of Andy Ram and Jonathan Erlich. Andy lives in Jerusalem and competes as an Israeli. Jonathan lives in Haifa and also competes as an Israeli. This doubles team supports Israel and is a role model for Israelis.” Josh saw them play at the Pilot Pen tournament, where he has been a ball person for 3 years. He made it to last year’s final as a ball person for James Blake and Marty Fish.

For Josh, tennis is truly a family sport. His younger brother Jesse (age 11) also plays on the junior circuit. His mother, Marcy Rubinstein, runs a tennis business called Marcy's Tennis Academy, LLC in Trumbull, CT. Her husband, Jay is also an avid tennis player. He plays father/son doubles with Jesse and Marcy plays mother/son doubles with Josh in the Pilot Pen Family Classic. Josh and his mom even won the tournament in 2006. USTA
New England honored the Rubinstein family as the "2006 USTA New England Family of the Year" in a ceremony at the International Tennis Hall of Fame in Newport, RI.

Despite he and his family’s deep involvement in tennis, Josh learned from his interview of Angela Buxton that it takes more than technique and tactics to make a great tennis champion.
The lessons learned from her story have everything to do with persistence and sheer determination in the face of adversity. “Without people like Angela Buxton clearing the way”, notes Josh, “I might not be given the opportunities that I take for granted today.”
Posted by Paula Vergara at 5:19 PM No comments: