by Paula Vergara
Originally Published: On the Baseline
8.30.2012

Flushing Meadows, NY—On Wednesday, No. 23 seed Kim Clijsters, the sentimental favorite to win the U.S. Open, was defeated by 18-year-old Brit, Laura Robson 7-6 (4), 7-6 (5) in a second round nail biter, ending an illustrious career.

Out of the gate, three-time U.S. Open champ Kim Clijsters was striking the ball well, and took a quick, 4-1 lead in the first set. Robson, a 5’10” lefty, began showing signs of improvement at 2-4, at 15-30 on Clijsters' serve. But Clijsters was dominating, and won the next 3 points to go up 5-2. With the first set win clearly within reach, Clijsters somehow lost momentum and simply wasn’t able to capitalize on her lead. Robson fought off three set points, and won the first set tiebreak.

Clijsters, who typically hugs the baseline during rallies, was consistently playing 4-5 feet behind the baseline, a sign that she wasn’t in control of the match. Clijsters also struggled with her returns, especially on Robson’s second serve. Robson’s aggressive, attacking-style of game earned her two match points at 6-5, but Clijsters managed to saved them both, setting up a second set tiebreak. It was a tight tiebreak, with Clijsters down 3-4, but she managed to even the score at 5-5. Robson took the lead at 6-5, and with her third match point, she won the tiebreak, and the match, ending Clijsters’ 15-year career.

“My biggest dreams came true here [at the U.S. Open] in 2005," said Clijsters. "This feels like the perfect place to retire. I just wish it wasn’t today.”

Prior to this match, Clijsters had never lost to a player ranked outside the Top 10 at U.S. Open, and hadn’t lost in the second round since 2000, so the idea of competing against the No. 89 ranked player in the world didn’t seem so challenging. It was evident that Clijsters wasn’t playing her best against Robson, but still had that competitive fire, even though she knew her tennis career was coming to a close.

Despite her second round loss at this year’s U.S. Open, Clijsters has had a somewhat rare opportunity to end her career on her own terms. The 29-year-old has taken her time –giving herself, and her fans an opportunity to savor those last few tournaments, and, to say goodbye.

At the beginning of Clijsters’ second career (2009), she was admittedly coming off of a personal roller coaster. She had recently become a new mother, and her father had just passed away. Tennis became a form of therapy for her. “Tennis helped me to get rid of emotions and have focus. I was able to let out a lot of energy after my Dad passed away,” said Clijsters. “It was the perfect release for me, to think on court about life and about what happens, and to smack the ball as hard as you can to get the frustration out.”

After battling a series of injuries this past year, the scale started to tip in the other direction for Clijsters. As a mother of a 4 year old, she could no longer invest as much emotion into tennis as she once had. The constant grind of the being on the road was beginning to weigh on her. Simply put, home life became more difficult to put aside. This time around, her retirement meant she was closing the tennis door for good.

Clijsters' legacy will be marked by her athleticism (trademark splits), superior shot making, and grace under pressure. She is just one of six women to have been ranked world No. 1 in singles and doubles simultaneously (others:  Martina Navratilova, Martina Hingis, Serena Williams, Arantxa Sánchez Vicario, and Lindsay Davenport). She also became the first mother to hold the No. 1 ranking since the ranking system first started in 1975.

Having accomplished everything she set out to accomplish in tennis, Clijsters can leave the sport with a good feeling.

“It’s been an incredible journey, and a lot of incredible dreams for me have come true,” says Clijsters.

Without question, Kim Clijsters still loves tennis. She always will. She will always have an emotional investment in the game, but the pressure is behind her. She will be playing doubles and mixed doubles at the U.S. Open, but now she can hit the ball for fun.
Posted by Paula Vergara at 1:29 AM No comments: 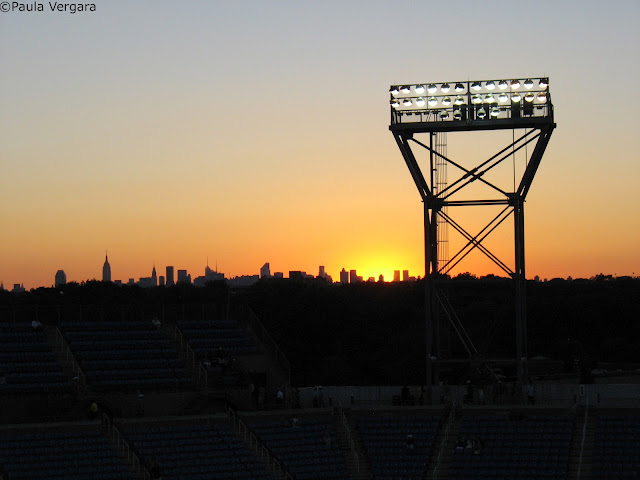 It's that time of year again. There is a slight hint of fall in the air, but summer is holding on for one last blast of heat. Last year at this time, New York City was not the place to be for an outdoor tennis event. The city was contending with an earthquake, hurricane, and seemingly endless amounts of rain. Lower Manhattan was evacuated. Even Arthur Ashe Kids Day was canceled.

That was then. This is now.

We are officially into the medal rounds in tennis at the Olympic Games, which means the stakes just got a bit higher. Before we settle in to watch some of the best "popcorn matches" of the year, let's take a look back at a week of highlights and lowlights.

Posted by Paula Vergara at 3:54 PM No comments: