The Stuff Legends Are Made Of 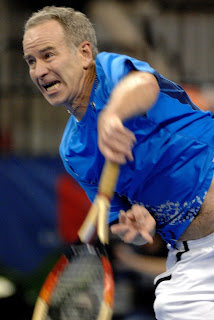 BOSTON--Thousands of enthusiastic tennis fans came out to the Agganis Arena in May to watch eight of the greatest legends in tennis face-off at Champions Cup Boston presented by Outback. Hall of Famer John McEnroe scored his first Outback Tour Championship win, and clinched a monumental victory against Pete Sampras on his road to the finals. The tournament boasted an incredible array of former top-10 players, including Jim Courier, Wayne Ferreira, Aaron Krickstein, Malivai Washington, Mikael Pernfors, and Jimmy Arias.
With Champions Cup Boston now in the rear-view mirror, two things are clear: the players not only reignited their passion for competition, they also reconnected tennis with Boston. Now in its third year, Outback Champions Series co-founder Jim Courier is thrilled about bringing high-caliber tennis back to Boston. “I think we’ve carved out a nice niche here. We are the only significant tennis event in town, and Boston has received this tournament very well. We’re proud of that. We feel like this is something that Boston was lacking. It’s such a fantastic town culturally and sports-wise. I think it’s important that Boston has the full gamut of activities for its population, and tennis certainly belongs, so we’re glad to bring it.” 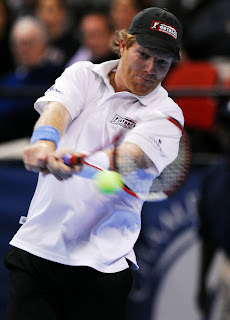 With $54,000 in prize money for a first place finish at each tournament and $150,000 awarded to the point leader at the end of the year, make no mistake about it—this is real, competitive tennis.

Some of the players took time out during the tournament to share their thoughts about returning to competition, their impressions of Boston, as well as some of their fondest memories from playing here in New England.

What Brought You Back to Competitive Tennis?

Aaron Krickstein: “Any athlete who was in the game like I was--for so long--really enjoys going out and competing. That’s the toughest thing for any athlete…when they have to stop. For me, I don’t think I picked up a racket for four years after I stopped competing. I was done with the traveling, so it was nice to get away. About 5 years later, I realized I wanted to get back into tennis, so I took a job at a country club in Boca Raton and started working there as the Tennis Director. Fortunately for me and the other guys, Jim Courier and Jon Venison had the idea of starting the Outback Champions Tour, which gave us an opportunity to come out and compete in these cities.”

Mikael Pernfors: “I love playing tennis and have a good time at these events. I felt I had to quit the regular [ATP] tour too early because of injuries. The first 4-5 years on the senior tour I felt like I still wanted to show that I can play and compete.”

Wayne Ferreira: “I enjoy the competing side of it. I don’t really enjoy the practicing side of it, but I’ve always loved playing and being competitive. I would have carried on playing [on the ATP tour] if tennis was a lot easier than it is. There’s so much work that needs to go into it. It’s still tough…I still have to work at it. I now play squash and soccer to keep fit, and play tennis for the competition. It works out well…I have a more relaxed feeling. I like it this way.”

Malivai Washington: “It’s fun watching these guys play. This is the first time I’ve played a match on hard courts in years. It will be interesting to see how my body holds up. That will determine in a big way, how to move forward in playing in the other events. Playing in Newport last year was different…the points are a lot shorter on grass and the surface was a little bit softer. It kind of throws me right into the thick of things and gets my attention as to the level and quality that these guys are playing right now.”

What Do You Think of Boston?

Aaron Krickstein: “I love Boston. It’s a great city. There are very knowledgeable tennis fans here. It’s a great venue to play in because there is no ATP tour tournament during the year, so people can come out and really enjoy themselves.”

Pete Sampras: “Boston is a great town—I was here last year. Talk about passionate fans [Red Sox]. I’ve never seen anything like it in the U.S. Being an LA guy, with the Dodgers and Lakers, you don’t have quite the same sort of passion. It’s pretty incredible. They really support their Red Sox and Celtics here.”

What are some of your memories playing here in New England?

Jim Courier: “I played my very first tour level match here at Longwood at 16 years old. I had just lost in the semi finals of Wimbledon juniors and came straight here [to Longwood], and lost in the first round in three sets. But it was my first taste of tour level tennis and that was exciting.”

Jimmy Arias: “I made the finals at Longwood back in ’83, but my favorite time here was playing in the 90s at Longwood, with a wooden racquet. I had been retired for 4-5 years, and played in the first round with Albert Chang [from Harvard] and I beat him in the first round. Unfortunately, when I had arrived at the tournament, Richie Reneberg had come up to me and said: ‘I heard you were playing with a wood racquet. How is that?’ I said to him, ‘If you hit the ball hard, I never miss with a wooden racquet. I just have trouble if someone spins it up high.’ I didn’t look at the draw, and I assumed I was losing in the first round, but then played Richie Reneberg in the 2nd round. He gave me high topspins, which wasn’t fair. I gave him the strategy!"
Posted by Paula Vergara at 9:42 AM No comments: 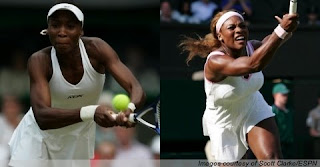 Upset was the name of the game at Wimbledon last week, opening the door to an all-Williams final—a sibling matchup that hasn’t been seen at the All England Club since 2003.

Both have their eyes on the prize, with Venus looking to take home her fifth Wimbledon title, while Serena is looking to make her long-awaited comeback.

Which sister will be the last player standing?