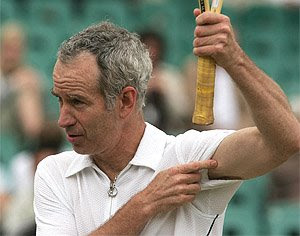 John McEnroe may be winding down his career on the seniors’ tour, but he’s saving some of his best tennis for last. His victory at Boston last week was his first tournament victory on the Outback Champions Tour since he joined it in November 2005, and his first seniors’ title of any kind since August 2005.

Playing in front of a packed crowd against Pete Sampras under the Friday night lights, McEnroe admitted to being a bit nervous before his match, having never beaten the much younger Sampras. Though Sampras was struggling with a bad back, McEnroe was still thrilled after his biggest win in years. “I can tell my kids I beat Sampras once,” he observed after his 2-6, 7-5, 10-4 (champion’s tiebreak) victory.

McEnroe continued his winning ways by beating out such greats as Jim Courier, and capped off a phenomenal week against 41-year old Aaron Krickstein in the finals 5-7, 6-3, 10-5. His classic serve-and-volley style is a formula that still works for McEnroe, despite the varying playing styles of the ‘younger’ power players prowling the circuit.

“You won’t find anybody playing today like McEnroe or Connors. Those guys are a dying breed,” said Krickstein. “Players today don’t hit the ball flat – they’re all topspin, western grip, baseliners. It’s great for us that he’s still around. He puts on a great show from a talent perspective and as a player. From a spectator standpoint, it’s great to watch him because he can do so much with the ball and has so much talent.”

Through the years, McEnroe hasn’t lost his rebellious nature, and his trademark rages continue to be a feature of his competitive outings. “The crowd kind of eggs him on a little bit and John likes that,” says Krickstein. He’s one of the few players who sometimes plays better when he’s upset.”

By virtue of good genes and a bit of Irish luck, McEnroe still has the moves to stay dangerous against players a decade or more younger. And despite having a highly successful career in the commentary booth, the kid from Queens knows that he’s not cut out to just be a spectator.

At the same time, McEnroe knows his physical limits is hopeful but realistic about his current success. “It’s gratifying at this age, to show that if you put in the time, it can pay off. But it’s frustrating, because oftentimes it’s hard to bounce back.”

He continues to be undecided about his future on the seniors’ circuit (McEnroe plays events on both the US-focused Outback Tour and the European-based Blackrock Tour), but it’s likely that he’ll curtail his playing schedule significantly over the next year.

Letting go completely, however, will be difficult. “I feel like I can go out for an hour and really play well. It’s hard to beat that feeling,’ he said.
Posted by Paula Vergara at 3:09 PM No comments: