An Emotional Run For Dinara Safina at the U.S. Open 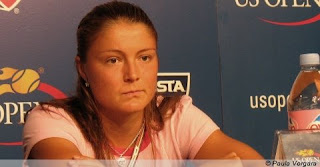 After a much needed day off on Tuesday, Dinara Safina will be squaring off in the quarterfinals today against Italy’s Flavia Pennetta, whom she defeated in Los Angeles in July.

Safina has had a phenomenal winning streak since the French Open, but continues to battle her emotional demons, on and off the court.

Luckily, she’s had relatively easy draw (so far), but will be facing some pretty heavy hitters as she moves forward. If she can get through today’s Pennetta match, she will face one of the Williams sisters in the semifinals, who have simply been on cruise control since the first round.

There are only two Russians left in the tournament: Dinara Safina and Elena Dementieva, and they are among four women with a chance to become no. 1 in the world when the US Open comes to a close.

Safina’s approach to winning: one match at a time. “Because every opponent is dangerous,” says Safina. She never looks ahead in the draw – only to the next person that she’ll be playing in the next round.

At almost 6 feet tall, the 22-year old Safina has simply been moving better on the court and has finally been able to reign in her negative emotions that have plagued her performance over the years.

Finding a new coach may have been her best move yet. Her new coach, Zeljko Krajan has given her much needed support that was previously lacking.

Her new coach, along with her fitness trainer Dejan Vojnovic, seem to be the right people to be in Safina’s corner.

When it comes to her new coach, Krajan knows how to help her channel her emotions and is also someone she can trust. “He understands me and I understand him,” says Safina. “That’s why somehow it’s easier that I can express my emotions.

But in Monday’s practice, Safina was again struggling with negative emotions and was physically drained. “After the warm-up, I just started to cry. I said, I cannot push anymore myself. (My coach) said, ‘We know that you’re not a machine. Just go out there and don’t think. If it’s 20% left from your body, just give this 20%. Don’t use another percent just throwing the balls around and shouting.’

Safina says, “Now finally I’ve found a coach that fits me, and fitness coach who is taking care of that I stay in 100% shape. So I think just paying off, all my results,” she says. “I believe much more in myself and what I’m able to do.”

A year ago, Safina was plagued with symptoms of chronic fatigue, and as a result, has been taking better care of herself, by following a strict diet.

“Now I’m taking much more care about the food. This is the most important thing for me now,” says Safina. “I know what I can eat and what I cannot eat and when and what, so I’m taking really good care of it.”

Safina also recognizes that she can’t stay up ‘til midnight and expect to be ready to tackle her competition the next day.

“I always have the same routine,” she says. “I always go early to bed. I mean, at 9:30 I’m already in the hotel room, so nobody will see me later than this.” (She also eats dinner at 7:30pm every night). Now that’s discipline.

Looking ahead, the Fed Cup final (Sept. 13-14) comes right on the heels of the US Open. Safina has confirmed that she will not be joining her Russian compatriots in the final against Spain.

“I think they’re playing on clay court, and it really doesn’t fit anywhere in my schedule,” says Safina.

“I think myself and my body is much more important than just go out there and just force yourself. I mean, when you’re having so many travels—I also flew in States to China, from China back to States. The body is very sensitive to these kinds of things, so I better take care of myself and prepare for the rest of the season. In this case, I will think a little bit more about myself.”

On another note, you simply can’t talk about Dinara Safina without mentioning her older brother, Marat.

For the first time EVER, Dinara and Marat will be seen together, playing on the same court, as they team up for the January 2009 Hopman Cup , an annual international team tennis tournament held in Perth, Australia.

Unlike other international team tennis tournaments (Fed Cup or Davis Cup for example) which are women or men only, the Hopman Cup is a mixed competition where male and female players team up together on combined teams.

The tournament is also an important lead-up to the Australian Open.
Posted by Paula Vergara at 11:55 AM No comments: