John “Izzy” Isner Stands Tall At His First US Open 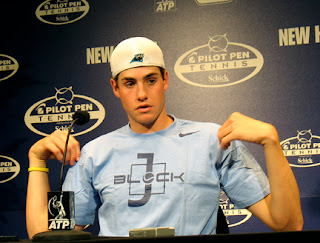 John Isner is quickly making a name for himself as the next rising star in American tennis. Few people knew his name at the beginning of the summer. By August, this six-foot-nine newcomer came close to beating Andy Roddick in the final of the Legg Mason Classic. He then got a wildcard into the Pilot Pen, and racked up more aces in the first week of his inaugural US Open than any veteran on the tour, despite his loss to Roger Federer.

When asked about the advantages and disadvantages of being six-foot-nine, this North Carolina native says “obviously, it helps with my serve, coming down at a really steep angle. When I’m serving well, I feel like I can place the ball anywhere. Also, being 6.9” I’m not as quick as most of the guys out there, but that’s something that I can work on. I can get a little quicker, and work on my footwork.”

Some say that John Isner has James Blake to thank for giving him a chance to play at the Pilot Pen. Let’s just say, James has good instincts. He was able to convince Ann Worcester, Tournament Director of the Pilot Pen to give John a wildcard into the tournament. In exchange, John reluctantly agreed to wear a J-Block t-shirt during practice sessions and all post-match press conferences during the Pilot Pen. In his final press conference, John kept his promise and wore the J-Block t-shirt. When asked if he’d be wearing it at the US Open, John said with a sigh of relief, “No, thank God!”

At 22, John Isner has re-defined success on the court, jumping 700 spots in the ATP rankings in less than 6 weeks. In college, he only lost one match during his junior and senior year combined. John says that “staying in college all four years has set me up to where I am today—I got a lot stronger and gained a lot of confidence, especially my last two years.” “Izzy” as his new fans call him, has the size, serve and talent to give the top 20 a run for their money.
Posted by Paula Vergara at 3:58 PM No comments: