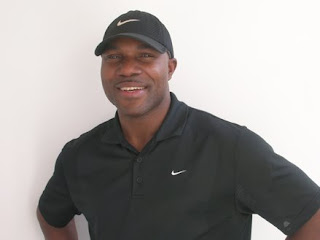 TRUMBULL, CT — Where there’s a will, there’s a way. Segun Charles Akinloye can certainly attest to that. His one singular passion for tennis has been a catalyst for a life far beyond the shores of West Africa, taking him to places he could only dream about as a boy.

Growing up in Auchi, Nigeria, Akinloye was like most boys, wanting to play sports and have fun. He and his family lived near the only tennis club within miles of his hometown, but with only one outdoor tennis court and no idea how to play, he needed to find a way to make it happen.

Akinloye’s parents had very little money. He and his parents and three brothers lived in a one-bedroom house, with barely enough money for basic necessities, never mind tennis lessons. The 8-year old was determined, and eventually found his way in to the tennis club as a ball boy, to learn the game.

With no racquets to play with, he and his friends would go down to the local butcher shop and get a scapula (shoulder blade) of a cow, let it dry (to kill the germs), and then use it as a makeshift tennis racquet. “Once the members finished playing at the club, our job as ball boys was to take down the net. In its place, we would put up a rope and just play,” said Akinloye. He and his friends would argue about which balls were in/out depending on whether they went over or under the rope.

This was a great training ground for Akinloye, but he knew that his parents put education first, and always insisted that his homework was done before playing tennis. His parents didn’t have the money to buy him a racquet, so in addition to using the scapula, he made use of a piece of plywood shaped as a paddle, hitting tennis balls that were so worn down, that the skins were peeled off. But, he still managed to make use of them.

Akinloye’s tennis talent became apparent to the Captain of the tennis club, Mr. Momoh. He would stop by the club early in the morning to watch him play, before members arrived. He even offered to hit balls with the boy and was impressed with his skill. Within 10 months, after using nothing but a piece of plywood as a racquet, Momoh could see that Akinloye had great potential.

Momoh gave Akinloye (then age 10) his first tennis racquet, albeit a broken one. A club player must have left the racquet behind, and Momoh took it and gave it to Akinloye. “It was like gold to me,” he said. I cherished that racquet.” His friends would ask to borrow it, since no other kid in town had a tennis racquet. Akinloye replied:
“I wouldn’t let anyone touch it.”

The first ball he hit with his cherished tennis racquet flew out of the court, far into the open field. He had never felt so much power come from his swing before. Momoh helped Akinloye to reign in his power and develop discipline and concentration.

One day, Momoh offered to coach Akinloye, recognizing his obvious potential. He also encouraged him to enter his first local tournament. Akinloye agreed, and with his constant determination and love for the game, he managed to make it all the way to the quarterfinals.

Later, Akinloye entered a state tournament as one of the top 8 players invited to play from the local governments in Nigeria. This tournament was a new experience for him – it was a large stadium, with 4 courts. Much different from the one-court club that he grew up playing at, and even made it all the way to the quarterfinals. Later, he entered The Texaco National Junior tournament, in which he was competing against players from every state across Nigeria.
Akinloye lost to the No. 1 seed in the final in 1983. “From that point on, I knew that I could play this game,” said Akinloye. He went on to win the Texaco National Junior tournament in 1984 and became the No. 1 junior player in Nigeria that same year.

In 1985, at just 16 1/2 years old, Akinloye came to America for the first time to play in the St. Louis Junior Clay Court tournament in Missouri. “As kids growing up in Nigeria, we thought that America was a different planet,” he said. “The dream of most African kids is to come to America, go to school, to travel to see what it looks like, or to live there.” Fortunately, there was no language barrier when Akinloye arrived in America, as he grew up speaking English.

Always keeping in mind what his parents had taught him about the importance of education, Akinloye decided to shift his focus from tennis to school. In 1990, he entered Livingston College to earn a B.S. in Business and later earned a Masters degree in Business Administration from the University of Bridgeport. America soon became his home. “If you work hard, it’s up to you as to what you want to achieve,” he says. For the past 12 1/2 years, Akinloye has been teaching tennis to members of all ages at the Trumbull Racquet Club in CT and for the past 6 1/2 years, he has been the club’s Tennis Director.

Akinloye has fond memories from his early days at the Trumbull Racquet Club, playing a match against a young teenager named James Blake. He was in high school at the time, ranked No. 1 in the country and had already developed his blistering forehand. “I was up against him 5-3 in the third set” says Akinloye, “and James got fired up. He was hitting bombs with that big forehand, and we ended up tied 5-5, then 6-5, then 6-6. James won the match 8-6. Akinloye saw the same potential in the young James that Mr. Momoh saw in him as a boy. He gave James a valuable piece of advice: “If you are able to get into a strong University with a strong tennis program, you will do very well.” Just a few years later, Blake was playing at Harvard. Akinloye and Blake still laugh about their tennis match to this day. “When James comes here to the club to practice, he’s very humble,” says Akinloye. “It’s a blessing to know someone like that. He never forgets people that he grew up with. He is a wonderful person. He and his brother Thomas both practice at the club when they are home.”

Akinloye works long hours on the court, conducting tennis clinics and coaching from 6am-11pm, 7 days a week. That’s 80 hours a week on a tennis court. “I eat one big meal at night. I’m not here to eat and play,” he says with a laugh. Fridays are a tough day for Akinloye– no breaks, but other days he has about one hour of a reprieve. He also makes time to coach 4 junior team tennis groups: 14 advanced/14 intermediate, 18 advanced/18 intermediate.

Akinloye and his wife Tanisha have three children: son Shyheim (11) daughters, Unique (7 1/2) and Symphony (4), who all play at the Trumbull Racquet Club. “I see the potential in them,” says Akinloye. “Probably one day you’re going to hear about them.”

Charles Akinloye has come a long way from his days living in Nigeria using a scapula to play tennis. He managed to carve out a path for himself, despite the odds. As Ralph Waldo Emerson once put it:
“Do not go where the path may lead. Go instead where there is no path and leave a trail.”
Posted by Paula Vergara at 1:29 PM 4 comments: