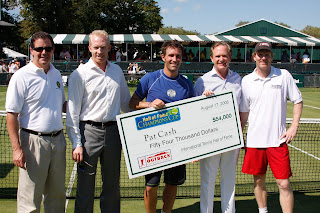 NEWPORT, RI--The International Tennis Hall of Fame played host to the Champions Cup last summer, a regular stop on the Outback Champions Series tour. With eight world-class players vying for the title, only one man remained standing after Sunday’s final. Pat Cash proved that grass is still his domain, as the 1987 Wimbledon champ served and volleyed his way to the title, beating out Hall of Famer, Jim Courier.

But the biggest story of the tournament came from John McEnroe’s default during a match against MaliVai Washington. After McEnroe took the first set 6-3, Washington was able to climb back to 4-2 in the second set. After McEnroe received four code violations for multiple obscenities and unsportsmanlike conduct, he was tossed out of the match. Jim Courier chimed in on the situation. “I think the umpire has to enforce the code. If John makes some infractions, then he should be penalized appropriately,” he said. Despite the default, McEnroe remained in the tournament due to the round-robin format.

On Sunday afternoon, the pressure was on, with the Champions Cup title just one match away. Courier and Cash had previously faced off in the 2007 third place match in Newport, in which Courier took out Cash in a three-set tiebreak. But Courier was a bit uneasy going into this final. “Pat is such a natural grass-courter and a very natural serve and volleyer,” says Courier. “I’m a fish out of water here –- I’m serving and volleying in a first and second serve which I probably haven’t done since I was 18 or 19 years old at Wimbledon.” After winning the first set 6-3, Cash lost a bit of control in the tail end of the second set. Courier saw an opportunity to break Cash, and proceeded to step up his game. The two battled it out in a seemingly never-ending 22-point game in which Courier saved five match points, bringing the second set to 5-4. Courier put in a great effort, but the birthday boy didn’t get his wish to conquer Cash’s big serve-and-volley game, losing 6-3, 6-4. “He clearly outplayed me today,” said Courier. When Cash was asked if he felt guilty about beating Courier on his birthday, he laughed and said: “No…”

Sunday’s matchup also included a battle for a third place finish between Magnus Larsson and MaliVai Washington. This was Larsson’s first time playing the Hall of Fame Champions Cup, and he cinched the win 6-4, 6-4, which proved to be a very competitive match. “Larsson has one of the best serves on the tour,” says Washington, a sentiment he shares with Cash. After the match, Washington was asked how he feels overall. He said jokingly, “Well, I feel like I can beat anyone in this crowd.”
Posted by Paula Vergara at 6:29 PM No comments: 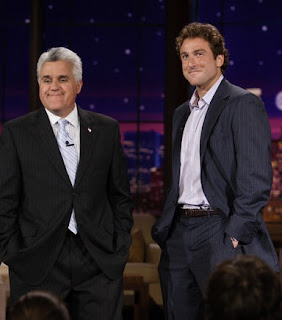 Former American player Justin Gimelstob has made his mark in the tennis world as one of the most personable, entertaining and forthright players, on or off the court.

Before retiring from the ATP tour in 2007 due to chronic back injuries, he had great success in doubles, winning mixed doubles titles at the 1998 Australian Open and French Open with partner Venus Williams. He was ranked as high as No. 18 in the world in doubles, and captured 13 career doubles titles.

But it was his quick wit and larger than life personality that landed him a new career as a tennis commentator. I recently had a candid conversation with Justin about life after tennis, his personal and professional learning curves, and his thoughts on the women’s tour.

“There’s no blueprint to life after tennis,” says Justin. As daunting as it was to think about the next chapter of his life, Justin always knew that his post-tennis career would have to involve something that would keep him close the game that he loves. These days, he is very content with his life off the court, after trading in his tennis racquet for a microphone.

“I loved my life playing, but it was never particularly easy for me. I was always dealing with a lot of injuries and tennis was very competitive,” says Justin. “I love my life now because I still get to be around tennis and play tennis. I missed it a lot during Wimbledon and the US Open, but for the most part, I really enjoy my life. I’ve been able to do some incredible things during in my first year outside of professional tennis. How many guys get to be on the Tonight Show?” 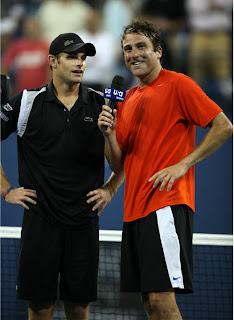 But like anything new, there is a learning curve, and Justin turned to the best in the business to learn the tricks of the trade. “I tried to get around people that had been in the business for a long time and just tried to pick their brain, whether it was Dick Enberg or Ted Robinson or Patrick McEnroe. I’ve worked really hard to learn the business,” he says.

Justin credits Dick Enberg for giving him a valuable piece of advice about avoiding some of the pitfalls of fame. Justin had been reading his autobiography, Dick Enberg, Oh, My! on a flight back from Australia, when ironically, they ended up sitting together. ‘Never read your critics,’ said Enberg. “I wish I had stuck to his advice more than I did.”

After getting into hot water for making flippant remarks about Anna Kournikova on a radio talk show this summer, Justin found himself being thrust into a different kind of spotlight—one that he didn’t see coming. The backlash from his comments created a storm of media criticism (both online and in print). The USTA took notice, as well as the WTA. Another learning curve in the making.

While he took full responsibility for his actions, Justin paid a price, both personally and professionally.

“It was a very painful time of my life. To see people who don’t know you or don’t understand all the information publicly malign you is a very hurtful process. Those sound bites [from the radio talk show] aren’t representative of the person that I am, and the people who know me, know that. Players that rushed to my defense (Andy Roddick and Lindsay Davenport among others) weren’t given the opportunity or the voice to be heard,” said Justin. “It was a better story to tell it the other way.”

“What hurt me the most are the people in the media who I generally have such a good relationship with because I give so much. But the second I took it too far, those same people who would call me for the sound bite, destroyed me.”

As with any career, some doors will open, while other doors close. One door in particular that slammed shut on Justin involved this year’s US Open Series ads. Justin would have been front and center as the host of these ads, but they were pulled as a result of his inappropriate comments. “There was just too much negative press around the situation,” said Justin.

In a surprising move, the USTA ended up using John McEnroe in a few of the same ads. Surprising, given “bad-boy” McEnroe’s history of volatility and inappropriate behavior.

Unfortunately, what Justin took the most pride in were those US Open Series ads. “It’s a shame, because everybody lost out–the ads lost out, I lost out and the game lost out. They [the ads] would have shown the players in a very funny, different, non-tennis light. I was the brunt of all the jokes – I was the fall guy in all of them, which I was fine with.”

But as one door closes, another one opens. The CBS Early Show came calling on Justin soon after. The original US Open Series ads can be seen online at Vimeo.com (type in Justin Gimelstob’s name).

Despite his painful experience, Justin came away with some important life lessons.

“Sometimes I give too much information. Sometimes I’m too accessible. Sometimes I should use my filter more. Sometimes I have to understand that context or sarcasm doesn’t always translate on paper like it does when people are just talking. There’s a certain place for being conditioned on a locker-room mentality that is hurtful and doesn’t belong in a public way.”

But the fact is, no one goes through life without making any mistakes. The most you can hope for is to learn from them and try to make fewer mistakes than anyone else. But don’t expect Justin to count every word that comes out of his mouth from now on. “At the end of the day, I am who I am,” says Justin. “I think there is value in that and I’m proud of that. What I’m trying to achieve is to do positive things.”

Positive is right. Earlier this summer, Justin was chosen to serve on the ATP Board of Directors as a Player Representative, and is excited about being involved in the governing of the game at such a pivotal time in men’s tennis.

In addition, Justin’s philanthropic endeavors have helped raise over 500,000 dollars for charity. He hosts the annual Justin Gimelstob Children’s Fund charity event to benefit children with cancer and blood diseases. 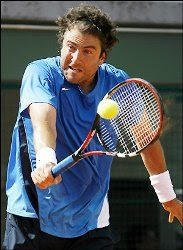 Justin Gimelstob on…
The state of women’s tennis
“I think that all things go through ebbs and flows. It’s great that Venus and Serena have reasserted themselves. I think they’re two huge superstars. Ana Ivanovic –you couldn’t find a better ambassador for the sport, in terms of a combination of style and substance. There are some challenges, though. With women’s tennis (on the American side) there’s a big void there, after Venus, Serena and Lindsay and that’s a concern. Maria Sharapova’s health–I mean she’s a huge, worldwide superstar. Hopefully she can be healthy and have a big year next year. Justine Henin retiring at age 25 at No. 1 in the world was [a] big blow.”

Coaching Lindsay
Lindsay Davenport was struggling with her game this summer, and turned to her old friend for guidance.

“Lindsay called me a couple of days before the US Open and asked if I could take a look at her game and try and help her out,” says Justin. “Coaching is a strong word. We’d practice and I’d watch her matches. She’s an incredible talent. She just needed a fresh pair of eyes.”

The player(s) with the best shot at being No. 1 at the end of the year
“I think Serena & Venus, when prepared and healthy, are the dominant players in the world.”