All in The Family for Wayne Bryan and Sons

Wayne Bryan is much more than the father of the world's best doubles team. 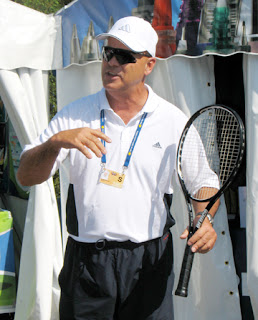 NEW HAVEN, Conn. - Where does Wayne Bryan get his energy? He says it’s from Diet Coke, but after the caffeine wears off, it’s his passion for tennis that keeps him motivated.

As tournament emcee for the ATP Tour and the Outback Champions Series, Bryan is a natural when it comes to getting the crowd pumped up. He’s been called everything from the ambassador of tennis to a pied piper. When he’s not emceeing a match, you can find Bryan teaching a tennis clinic at just about every pro tournament around the country, including the Pilot Pen in New Haven and the Outback Champions Series event in Boston. He spends an average of 180 days a year on the road with racquet in tow, doing what he does best: Teaching, coaching and entertaining.

Bryan began playing tennis as a kid with his dad "as a way to avoid going to church," he said with a laugh. "If I could keep my dad out there on the court in a long three-setter, we’d play through church." Bryan’s devilish avoidance of church in favor of more court time helped to set the stage for his lifelong love of tennis.

He recalls "that moment" as a kid, when he began to see tennis as more than just a game. His dad took him to a pro tournament at the LA Tennis Club. "I sat in the front row, about 15 feet from the player, and I saw him hit a powerful forehand volley. The player was an Inca god named Alejandro Olmedo, a Wimbledon and Davis Cup champ. Since watching that match, I’ve been on a tennis court every day in one way or another," he said.

Bryan was never one to sit on the sidelines in any activity. Growing up in Miami (he later moved to Southern California around age 10), he played multiple sports, including tennis and football. He was an Eagle Scout, class president all four years of high school and was the No.1 player and captain of his University of California-Santa Barbara tennis team. After college, he went on to law school, and later somehow found time to briefly join the pro tennis tour. Wanting to stay involved in the game, he became tennis director and club pro at a new club in Camarillo, Calif., where he worked for 26 years before branching out into his current role.

He calls himself "a student of teaching, learning, motivation, leadership and parenting." Being a parent may just be one of Bryan’s greatest accomplishments. As the proud father of Bob and Mike Bryan, the No.1- ranked doubles team in the world, he has plenty to be proud of. Very few doubles teams have achieved the level of success in tennis the Bryan brothers have. They were two-time All-Americans at Stanford, have won 41 doubles titles, including all four Grand Slam events and have been key members of the US Davis Cup team since 2003. His sons will be finishing out 2007 as the No. 1 doubles team in the world for the third year in a row and for the fourth time in the past five years.

Being genetically gifted may help Mike and Bob’s success on court, but their focus and discipline is the result of many years of hard work. Coach Bryan says that he and his wife Kathy (a former pro player) ran a tight ship when their twin boys were young. He believes that "kids like to have boundaries. It’s only when you have boundaries that greatness, fun and creativity can occur." And fun was always on the agenda in the Bryan household, regardless of the activity.

That’s not to say that Mike and Bob didn’t try to step over their father’s boundaries on occasion. "There were lots of midnight meetings," says Bryan, but it was those long talks and structured boundaries that made a difference. Nowadays, Coach Bryan’s twin boys are no longer boys. At 29, Mike and Bob are calling the shots, but still check in with Dad on a regular basis.

For Coach Bryan, success isn’t defined by winning tennis matches. Success means giving back—to your kids, to your spouse and to your community. He has helped more than a few parents when he authored a book called Raising Your Child to be a Champion in Athletics, Arts and Academics. It’s the most un-book-like book you can read, filled with 128 pages of informative, fun and insightful tips on helping kids aspire to their full potential. It took him seven long years to write and has become one of the most passed around books among parents since it hit the bookstores.

Coach Bryan can also add "musician" to his long list of accomplishments—as lead guitarist for the Bryan Bros. Band and the Wayne Bryan Band, with son Mike on drums and Bob on keyboard. The threesome are able to combine their love of music with giving back to the community, taking their act on the road to perform at charity events and tour stops. Coach Bryan has also devoted his time to World Team Tennis, as the coach of the Idaho Sneakers in 1999, and more recently as the coach for the Sacramento Capitals, winning the championships in 2002 and 2007. He was voted coach of the year from 2004-2006.

Looking back, Wayne says he’s never worked a day in his life.
He simply loves what he does.
Posted by Paula Vergara at 3:46 PM 1 comment: