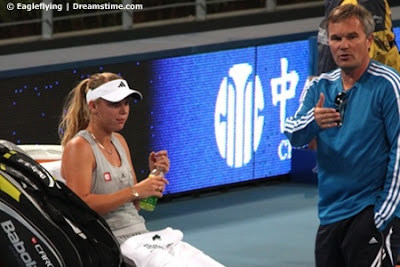 There always seems to be a few hotly debated issues that bubble up now and again in tennis: Who’s the GOAT? Is the season too long? Should on-court coaching or from-the-stands coaching be allowed? To pick just one issue to debate is not so easy.

The GOAT debate usually turns into a circular discussion, with no right answer. And when a tennis debate reaches an apparently irresolvable status, I can’t even go there. I will say this: Can we all at least wait until players have retired before they are included in the GOAT conversation? Thank you.

The length of the WTA Tour’s tennis season has long been blamed as the reason for too many injuries, and the WTA’s 2009 Roadmap didn’t seem to resolve that problem. With so many people having a vested interest in the Tour’s schedule, there’s no simple solution or quick fix to make it all better. For now, I’ll leave this debate to the experts.

If I were to choose one tennis debate to dive into head first, it would have to be on-court coaching. It is a relatively new debate, with rules that, from a distance, don’t exactly seem fair to the players or coaches.

Starting in 2009, on-court coaching was permanently implemented after a two-year trial. It has become an optional “benefit” for players on the WTA Tour, but with limits—just one coaching request per set allowed, either at the end of a changeover, or at the end of a set.

Players can also request their coach’s presence on-court if their opponent has taken a medical timeout, a toilet break, or change of attire break. Surprisingly, on-court coaching is not allowed at Grand Slams, where the stakes are the highest.

On-court coaching is also a source of amusement for TV viewers, with coaches being required to wear microphones during their conversations with a player, only if the match is televised. To be honest, it really isn’t all that amusing if the coach and player are speaking Russian or Polish, or some other language that most viewers don’t understand.

The real point of contention is not whether on-court coaching should be allowed, but rather, should coaching-from-the-stands be allowed. Justine Henin is one player who has been chastised for taking cues from her coach Carlos Rodriguez, via hand signals, as he sits and watches from the stands. As if they’re committing a crime, or the player is cheating on a test.

What exactly is wrong with coaching-from-the-stands? Is it really cheating? Is it giving a player an advantage over their opponent, even though their opponent has the option to do the same? Does it alter the integrity of the sport? Should players not be allowed to look into the stands during a match? I’m all in favor of following rules, but I don’t believe that rules are always fair (or are even sensible) in every instance.

If you look at other professional sports—baseball, football, basketball, or hockey—coaches are situated on the side of the field, on the court, or standing next to the players’ bench. Some even wear headsets so they can talk to other coaches off the field. Coaches are free to talk to, yell at, or point fingers in the direction of any player at any time during the game.

Tennis coaches aren’t allowed anywhere near players during a match unless they are called onto the court. Even then, they typically have just two minutes at the end of a set, or 90 seconds during a changeover to give their best advice before heading back to their seat, in silence.

I understand. Tennis is different. It’s an individual sport. It’s a quiet sport (grunting aside). Players are out there, alone, and have to rely on themselves for support. Which is why tennis is such an interesting sport to watch. It’s a mentally challenging game.

Which brings us back to the issue of fairness. If the WTA Tour is going to allow on-court coaching, why should the rules limit the amount of coaching? Why not just give players the option to call their coach on-court during any changeover, at the end of each set, and during the occasional medical time out?

Here’s a head-scratcher that also feeds the fairness debate: The person that a player chooses for on-court coaching doesn’t necessarily have to be their actual coach. It is completely within the rules for a player to choose a parent, friend, boyfriend, sister, brother, or even a fellow player as an on-court coach for their match. Baffling.

I’m not sure what the answers are to the on-court coaching issues, but I am sure the debate will continue. As far as the GOAT debate is concerned, I’ll go there once I can figure out the right answer.
Posted by Paula Vergara at 2:46 PM No comments: