Beneath surface of blue clay debate: Players want a say

Love it or hate it, the controversial blue-colored clay (or "la pista azul") has become the main attraction at the Mutua Madrid Open. 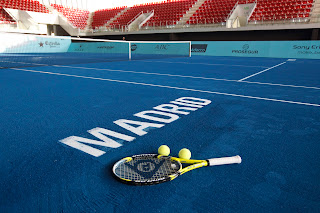 The combined men's and women's event in Madrid is the first ATP World Tour or WTA tournament to use blue clay. Since 2009, the tournament has operated on red clay, making it more aligned with the European clay-court season. It also had served as great preparation for Roland Garros. So here's the burning question: Why buck tradition by ditching the red clay?

According to tournament owner Ion Tiriac, a former pro player and French Open doubles champion, the rationale for switching from red to blue clay has to do with better visibility. Quite simply, the blue clay makes it easier for players and spectators to see the yellow ball on the court. It will also improve television viewing — a major asset to the tournament.

In fact, tournament representatives say that the visibility of the yellow ball on a blue surface will improve by at least 15% compared to the red clay, due to the increased color contrast.

Without question, the new color has a certain novelty and has attracted significant attention. However, with a sport so steeped in tradition, tennis players have been resistant to embrace the color change.

Novak Djokovic and Rafael Nadal in particular are not keen on calling the use of blue clay "progress," and have expressed concerns about why this decision was approved by the ATP World Tour.

"I'm not really too happy about it," defending champion Novak Djokovic said during last month's Monte Carlo Rolex Masters. "But there is a certain rule within the ATP that the president is able to make decisions by himself without having players agree to. That rule has to be changed because it's not fair. That's what happened last year. That is why Madrid has a blue clay."

This sentiment from the world No. 1 is reminiscent of the frustration that top-ranked players experienced during the 2011 U.S. Open, when they didn't have any say about when to play (or not play) during rain delays.

"I understand that we all want to see a certain change and improvement in our tennis world," Djokovic said. "But on the other hand, you need to hear out what the players say, especially the top ones, because we need to feel that our opinion matters. That was not the case this time."

Nadal, the undisputed king of clay who is playing on home soil, believes that using blue clay is a mistake, saying that it only benefits the tournament owner, not the players.
Andy Murray, who withdrew from the Madrid tournament because of a back injury, says that he understands the reasons for the color change but feels that that the timing is bad. With the French Open just a few short weeks away, he believes that the tournament should be played on red clay. In other words, it's not exactly the best time to be experimenting with court surfaces.

Maria Sharapova, who had a chance to practice on the blue clay a few days prior to the start of the Madrid tournament, stopped short of saying she liked it.

"It's a little bit different than the red clay," Sharapova said. "Some bounces are a bit different. But I think it's about making an adjustment. Obviously, the big tournament for us is Roland Garros, and that's on the red clay."

So just how is this blue clay produced?

It all starts with the original, red clay. Iron oxide is extracted from the clay, producing a white clay, which is then treated with a water-based blue dye for 24 hours prior to drying. The clay then goes through a cooking process, where it is heated to a temperature between 900 to 950 degrees. The clay is then ground and sifted to an exact grain size. Two layers of blue clay are placed on the court, with the first layer being a much finer grain, which serves to set the base.

The iron oxide is removed at the start of the process to produce a white clay, simply because the original red clay cannot be directly dyed to the desired blue color.

Though blue clay courts probably won't be popping up at Roland Garros (or any other clay court tournaments for that matter), the color blue is no stranger to the ATP Tour. Of the 37 tournaments played on hardcourts, 31 of them are blue. That's 84% of all hardcourt tournaments and 49% of all ATP World tour tournaments. On the WTA side, the Family Circle Cup in Charleston is played on green clay, which hasn't raised any eyebrows.

Once the blue dust settles, players, fans, and officials will be able to determine if this color change is good for the game, or a simply a gimmick gone bad.

Posted by Paula Vergara at 5:54 PM No comments: